These stories can be read consecutively in the page, Book of Longing at the top of the site.

I return to the Practice of Goodness as one returns to the arms of a long-desired lover. With relief, and a sense that I have always belonged here, and the separation has been harder than I could ever let myself know until it was over.

I have written on my blog No Place for Sheep in the pages Infidelity and the category Adultery of my affair with a married man.

This affair disturbed me so deeply I decided to seek help to deal with its aftermath. The Book of Longing, a title I’ve borrowed from Leonard Cohen, is my record of discovery.

I am tired of the superficial. We love, we hurt, we ache, we desire, we rage, we suffer and yet we speak to each other mostly of the banalities of life on earth, enduring the rest in silence.

The deeps are what draw me. The mysteries. The things concealed and unspoken. These are what I will give voice to as best I can.

There’s no chronological order to be found here. The flow of eternity does not adapt itself to the demands of time, and what happens in the places we call our hearts and spirits has little to do with time, and everything to do with eternity.

I met him, my lover, only because he was ill, suffering from the same cancer  I suffer, though I was in remission and he was at the end of a gruelling cycle of chemotherapy. We’d known each other for a couple of years in cyberspace, sharing the same politically-minded community and interests, admiring one another’s writing. When I was visiting his area I suggested we meet for coffee, as I wanted to give encouragement and companionship to someone I liked, who was enduring one of life’s worst experiences.

We agreed to meet in the Nolan room at the National Gallery. The painting that impressed itself upon me most that morning was the horse falling upside down off a cliff. I didn’t know why at the time. But later it came to signify my own state of mind. 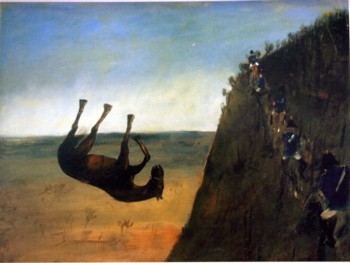 My husband, about whom I’ve also written on No Place for Sheep, had some time earlier suffered a massive stroke that left him paralysed on the right side of his body, without coherent speech, completely dependent and in a nursing home. Not long before I met the man who was to become my lover, I’d spent several months by my husband’s bedside.

During this time of witnessing, I had a most extraordinary experience. Each time I visited and settled myself beside his bed I felt a strange sensation that was  physical, mental, emotional, and spiritual, though I am not quite sure of the meaning of that last term as I have no religious belief. Perhaps metaphysical would serve better.

The sensation as I can best describe it was one of intense love and compassion, unlike anything I have ever felt before, and requiring no response from him, which was just as well as he could give none. This sensation was self-renewing: the more I allowed myself to experience it, the more it flooded into me, and through me to him.

On its path the strange energy nurtured and strengthened me, and I was able to daily spend hours with him for what turned out to be months, without ever feeling exhausted. Other circumstances surrounding the situation exhausted me, but not being with him. I was able to give myself over completely to this extended experience, which was remarkable  as my personality is not at all suited to the long periods of holistic stillness it demanded.

It was in this altered state that I suggested  to the man who became my lover that we have coffee. Open, vulnerable, grief-stricken at the loss of my husband as I’d known him, yet in strong denial of all my sorrow and anger about what had been lost, I found another man fighting for his life, one who unlike my husband could respond and who, unlike my husband, could ask and give and love me back. He, I have no doubt, sensed in me the loving compassion that hadn’t left me, and his need of it was great.

And so we fell in love, at first sight, in the Nolan room in front of the painting of the falling horse. It was a coup de foudre. And neither of us knew the first thing to do about it.

We are eating lunch at an outdoor cafe in a southern city.  It’s winter. I’m used to warmer climates and am wrapped in layers of clothing, up to my chin. He leans across the table, and strokes my face with his forefinger. I make a joke, and he taps me lightly on the side of my nose. Then he says, I love you. And then we look at one another and the look is fierce. He says, softly, you’re mine, and I say, softly, I know.

This is not something I could have imagined myself saying to a man, had I ever given the matter any thought. But I am overwhelmed by a rush of hot feeling that causes me to temporarily relinquish ownership of myself. He holds my gaze, he doesn’t flinch or blink, he holds me there in that unexpected and foreign desire. Remember, he says. We have done so many things today and every one of them is for us to remember. Yes?

The eroticism of surrender. It is new to me, at least to this extent.

He feels it also. He writes of how he wants me to fall on him while he lies helpless, and take whatever I want for as long as I want and I find it reassuring, the knowledge that this desire to yield is not confined to me. When he writes of his wish I feel in myself the thrill of domination, though it is tempered by discomfort: I am not used to taking what I want without considering the other. I wonder if I might feel silly, embarrassed, feasting on him while he lies still and unresponsive. I tell him this. Absolute honesty, he’s promised, and I’ve promised in return. No pretending. This is one of the things I love about you, he tells me. I know you will never pretend to feel something you don’t. Everything with you is real.

Ah, he writes, when I tell him of my fears. I will respond. But I won’t touch you. You’ll have to tie my hands so I can’t touch your breasts, otherwise I won’t be able to resist. And then you can lean over me and lower a nipple into my mouth and I will tongue and suck and feed. You will decide when to take your breast away from me, and when to give it back. I will beg. I know that. But you will decide.

I’m weeping in the office of the man I’ve come to for help with myself. For the last ten days the right side of my body from my head to my foot, has been painfully seized up. It feels like structural damage.

I’ve been to this office four times now, and the moment I sit down I start to cry and then I continue to cry, pretty much for the next hour.  Strange, apparently disconnected thoughts erupt through the weeping. I tell him about my right side, how it hurts.

Which side of your husband’s body was paralysed? he asks me.

The right side, I say, and then double over with anguish so bad I can barely breathe.