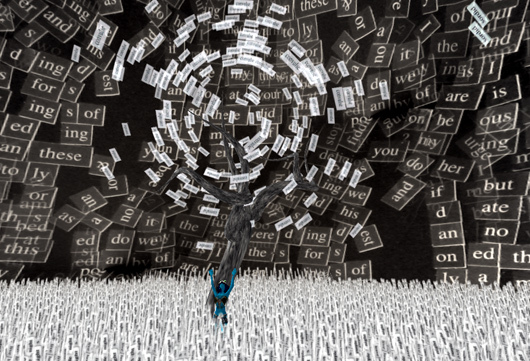 There are days when strings of words trail repetitively across the consciousness in an infinite loop, like tickers scrolling headline text at the bottom of the television screen. I hate those days.

Today there are two word strings. They run on endlessly beneath images of our family’s new baby girl, her head no bigger than the palm of my hand. Her brothers, her father, her mother, our large extended family gather in the maternity suite drinking pink champagne while she sleeps, our baby girl, named after her great-grandmother. I worry about her future, and if the world will be a better place for women by the time she’s ready to find her feet in it, and fear that it will not.

These are the word strings that unwind themselves at the bottom of a screen only I can see, beneath our girl’s tiny tender head, beneath the vision of our family, busy making new memories.

One. It wouldn’t have happened if I’d been able to find a parking spot.

When I first told J. he’d written this as an explanation, excuse, rationalisation, justification, she laughed in disbelief.

For myself, today, I have been wrestling with the notion that my fate that day hung on the availability of a parking spot. I’m having trouble getting my head around this much insult, on top of sexual assault.

I am so glad he wrote it. Because I doubt anyone would believe me if he’d only said it. But there it is.

Two. Said not by him but by his wife. I’m glad he came to you and not a prostitute.

To think such people exist in a world I thought I knew.

When I settle the four-year-old in his bed beside mine he says, Giddy, you have to keep me safe. I will keep you safe, I tell him, a vow made in a heartbeat. I’ll spill blood to keep him safe. Giddy, he says, you have to tickle my tummy and my back so I can go to sleep.

He’s full of instructions tonight. Later I will be woken from my uneasy sleep by him sitting upright in his bed, singing songs he’s learned at day care. He’s sound asleep. Gently, I lay him back on his pillow. Hello, he says. I go to the bathroom, sit on the toilet lid and laugh till I cry, and cry. And cry.

I’m glad he came to you and not a prostitute. The banner unwound itself across the screen as I lay beside the child, tickling his tummy. It wouldn’t have happened if I’d been able to find a parking spot. I can see why J laughed. It’s a line from Seinfeld. It’s Homer Simpson. It’s all the hatred and fear and contempt and disregard and loathing and resentment and grievance that some men feel for women, but never admit, even to themselves.

That’s all it hinged on for him. A place to park the car.

I’m glad he came to you and not a prostitute.

The two-and-a-half year old is nursing his new baby sister, assisted by their dad. The infant opens her mouth in a series of enormous yawns. Help me! cries her brother. Help me, she’s going to bite me! He pulls his arms from under her and we all scream but her father’s hands are there to catch her, to keep her safe.

He gives the baby to me. For a while the strings of words vanish and I know only the mysterious contentment of holding a brand new life in my arms. I came out of Mummy’s tummy first, the four-year-old breathes in my ear, as he hangs off my arm. So you are my Giddy. But I’ll share, he says and nods, sage-like.

I understand the tickers won’t cease their infinite scrolling until I’ve stripped the words they contain of their significance. I don’t know how to proceed. I can only hope it will eventually become clear to me. Someday. Some time. While I’m busy. Keeping him safe. In a world I know.

2 thoughts on “ELEVEN: Days of words”